This is an annual event organised by John Copsey secativcmac@btinternet.com on behalf of Impington Village College Model Aeroplane Club.  The prize is the Malmstrom Cup named after the founder of the club Ray Malmstrom who started the club in 1946.

Some pictures of the last event are below.  Everyone is welcome. 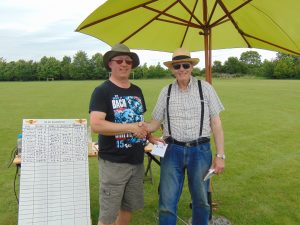 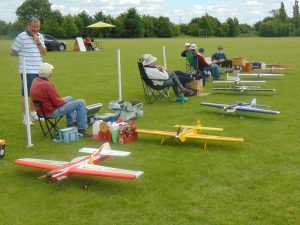 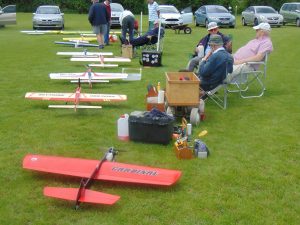 For those that don’t know, CLAPA (Control Line Aerobatic Pilots Association) is the BMFA Special Interest Group which organises CL Precision Aerobatics events in the UK.

UK based F2b pilots who are within reasonable travelling distance of Cambridge, will be turning up (weather permitting, of course) and competing for the RayMalmström Cup as well as their standing in the 2021 CLAPA League table.

The event invariably sees some very exciting flying, so why not come and see what it is all about.

AS WELL AS F2b flying, the club is willing to hold an entry level competition if there is enough interest (minimum 3 competitors).  This will either be a ‘Taster Stunt’* event or a ‘Class ll’ event **.

* Taster Stunt is a judged competition for novices, where you perform some compulsory, but very basic manoeuvres, (like taking off and landing), and then nominate to perform other ‘stunts’ (that you are comfortable executing) from an approved list.  The more manoeuvres you correctly execute (in the stated order) the more points you get.  Any control line model is allowed,  from a combat wing upwards.  Assistance will be available.

** Class ll is a more advanced competition which is based on the F2b schedule, but with the most tricky parts left out.

Rules and score sheets for the above competitions are available from me (secativcmac@btinternet.com) also on 07825 736692.

Following on from the very popular BMFA “In the Air Tonight” – An introduction to Aerobatics, the NORWICH MODEL AERO CLUB are to host an event on Sunday 18th July from 9am at former RAF Coltishall (subject to Covid regulations).

Registrations will be limited to first come, first served in order to ensure participants get the most from the day.

Places are very limited so please book early. During the day, you will be assigned to an experienced Mentor who will be able to assist with correct model set up and all important model trimming.  Some of the mentors have represented the UK at World Championship events.  Any model that is capable of a loop and a roll will be suitable but must comply with an 82db maximum noise limit.  You will be able to hone your skills throughout the day and for those interested will be able to enter a low key Competition at the end of the day.

These events are a great opportunity to take your present flying abilities and develop these onto new levels.  Please follow the link below to apply for a place and select CLUBMAN as your entry.  There is a £6 entry fee.

Should you require any further information, please contact Graham Gooch at norwichmodelaeroclub@gmail.com

This will be a video meeting using Zoom.  An e-mail with joining instructions will be sent to everyone in advance of the meeting.  Please join the meeting from 7.30pm – the meeting will start at 7.45pm.

Documents for the meeting are on the website under “Current Documents”.

Make sure you set things up well in advance!!

The AGM will be a Zoom meeting and details will be sent to everyone nearer the time.  Please log in from 7.30pm for a prompt start at 7.45pm.