As you may have read in the BMFA News, the Achievement Scheme Review Committee has initiated the annual award of a Certificate of Merit  either for service to and or promotion of the achievement scheme, or to a successful test candidate who has displayed outstanding attitude, determination, diligence and or performance in the lead up to and or during a test.  Only 4 awards are made each year.

Bill Michie, an Area Chief Examiner (ACE)  in the East Anglia Area, was one of the 4 who was selected for this award.

Bill had been an Examiner at the Stansted and Harlow Clubs for 12 years before being appointed as an ACE. The primary job of an ACE is to test candidates for Club Examiner positions.  However, they also have the remit to publicise and promote the Achievement Scheme.

There was a requirement for an experienced pilot to participate in the AS Workshops by flying both badly and to the required standard.  Bill performed this task admirably for 11 workshops and his ability to adopt the required persona and flying skills added a great deal of authenticity and humour to these workshops.  Bill was an accomplished F3A pilot who flew in competition regularly to a good standard.  He chose to take the C Aerobatic (C Ae) test as it moved him out of his normal F3A aerobatic comfort zone.  Having achieved that, he also took and passed the Scale C.  For the past 2 years, Bill has been the nominated lead for the C Ae test in the East Anglia Area.  He was also keen to coach candidates for both C tests.  This amounted to about 40 individual sessions.  His approach to this task was meticulous and detailed.  He has taken 4 C Ae tests, and passed 3 candidates, while he took and passed 1 Scale C candidate.

Although outside the Achievement Scheme, Bill was also a great supporter of the various aerobatic training days that have been held around the East Anglia Area for the past 6 years.  So there are many pilots in the Area who have benefited from Bill coaching as well as his role as Examiner.  This photo shows Bill in a typical role of coach explaining the finer points of flying aerobatics. 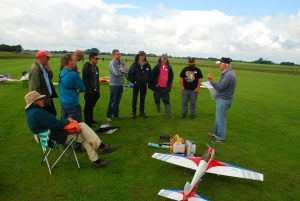 Well done and thank you Bill.